I’ve taken down part of a ceiling following a roof leak at St Catherine’s Church hall, Mile Cross, and am awaiting repair of the box gutter by a specialist firm before replacing the ceiling.

A day off for my wife’s birthday saw us have a great walk to see the seals at Horsey, before a hearty lunch at Banningham Crown. 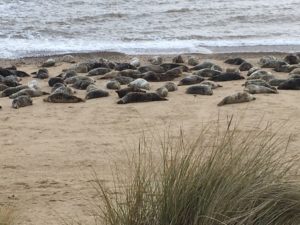 Having fitted new worktops to a kitchen in Wooll Drive, North Walsham, in December last year, the client called me back as she had decided to replace the whole kitchen, re-using the new worktops, getting in more units for storage, altering the electrics, and finishing off with glazed wall tiles. 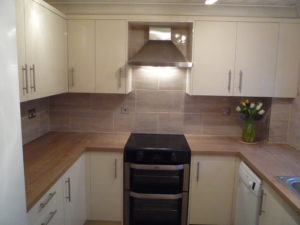 I’ve also extended an existing kitchen at Peter Pulling Drive, Queens Hill, by fitting an oven tower and pull out larder units with additional base/wall units and worktops to match.

Business remains brisk, and I’ve had so many recent enquiries that I’m going to be unable to take them all on  as I’m currently booked up for March, April, and now taking bookings into May.

We use cookies on our website to give you the most relevant experience by remembering your preferences and repeat visits. By clicking “Accept All”, you consent to the use of ALL the cookies. However, you may visit "Cookie Settings" to provide a controlled consent.
Cookie SettingsAccept All
Manage consent

This website uses cookies to improve your experience while you navigate through the website. Out of these, the cookies that are categorized as necessary are stored on your browser as they are essential for the working of basic functionalities of the website. We also use third-party cookies that help us analyze and understand how you use this website. These cookies will be stored in your browser only with your consent. You also have the option to opt-out of these cookies. But opting out of some of these cookies may affect your browsing experience.
Necessary Always Enabled
Necessary cookies are absolutely essential for the website to function properly. These cookies ensure basic functionalities and security features of the website, anonymously.
Functional
Functional cookies help to perform certain functionalities like sharing the content of the website on social media platforms, collect feedbacks, and other third-party features.
Performance
Performance cookies are used to understand and analyze the key performance indexes of the website which helps in delivering a better user experience for the visitors.
Analytics
Analytical cookies are used to understand how visitors interact with the website. These cookies help provide information on metrics the number of visitors, bounce rate, traffic source, etc.
Advertisement
Advertisement cookies are used to provide visitors with relevant ads and marketing campaigns. These cookies track visitors across websites and collect information to provide customized ads.
Others
Other uncategorized cookies are those that are being analyzed and have not been classified into a category as yet.
SAVE & ACCEPT
Powered by